I understand you love your 5 speed but there are people on some Forums arguing that you are wasting about a tenth or so shifting, LOL!!
You can't shift as fast as a well tuned 3t40 that chirps the tires on every shift.

One thing I have in my bag of tricks it's to try starting off in 2nd gear. That would save one shift. I found a chart online that shows "ideal" gearing for a specific tire size, mph and weight. With my stock 3.61 fdr, the perfect launch gearing was between first and second. Since the slicks are a hair shorter, second may work better. But it will take some more seat time to get it right. I've probably only got a dozen or two quarter mile runs on this car. I know it took you more than that to do it. Haha

I just downloaded my gopro videos and there's definitely more bite than power at the launch rpm I used. So there's room to escalate.

Go for it my friend!!
I built what, at the time, was the ultimate N/A combination.
It was fun, cost a lot of fun money, and did it's job.
I'm 68 years old now and Beretta-less but respect your devotion and talent.
Give it Hell and do it Woody!!

Well, your first car was probably an A-body cuda...mine was a 5spd Beretta. Haha

Good to hear from you old man, don't be a stranger.

It took quite a few baby naps, but I finally put a video together from racing last year.

After a whole winter in my old man's new (but cold) garage on 4 flat tires...I drove it back to my place. It's amazing what just a set of wheels do for the whole look of a car. 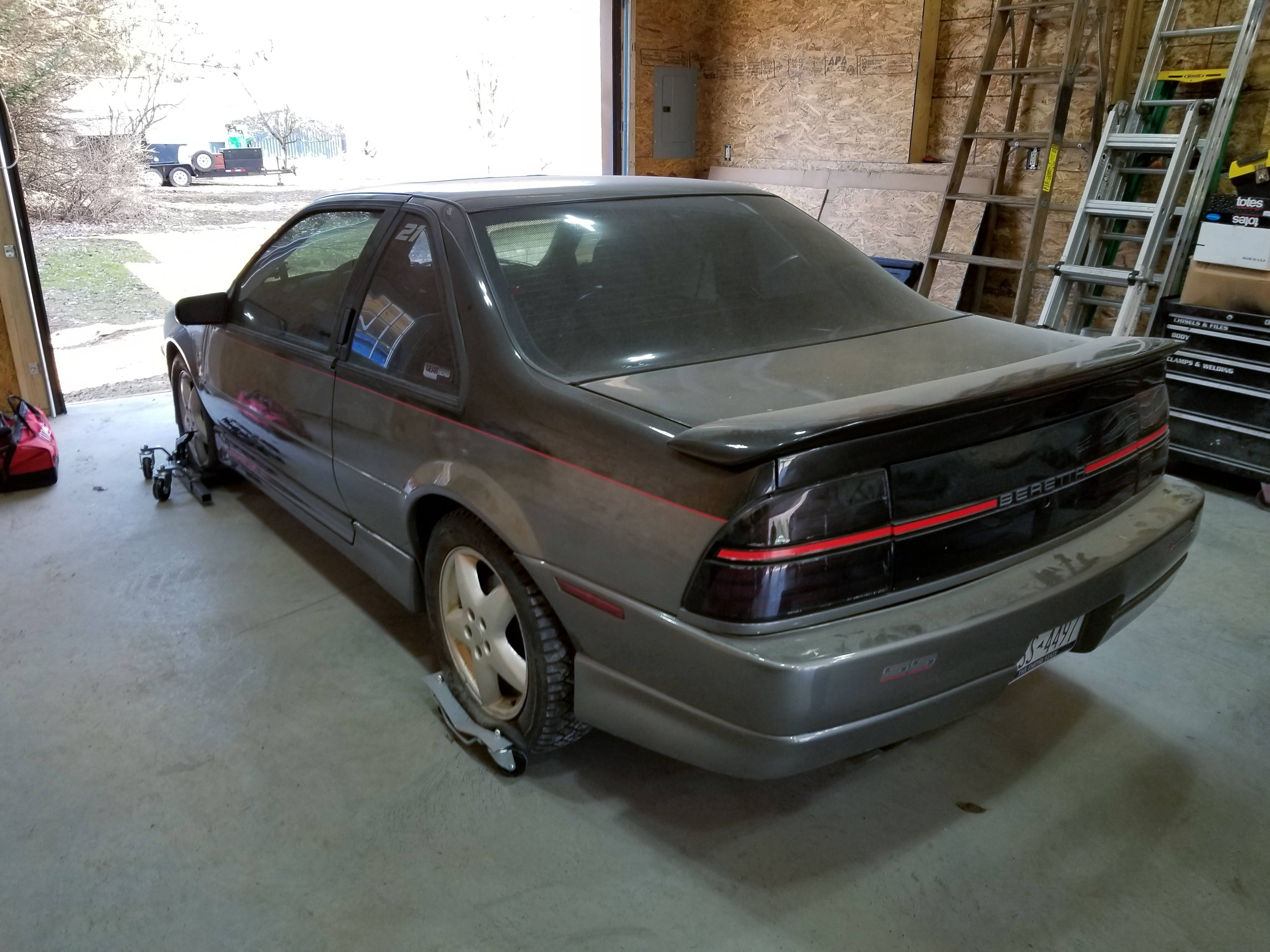 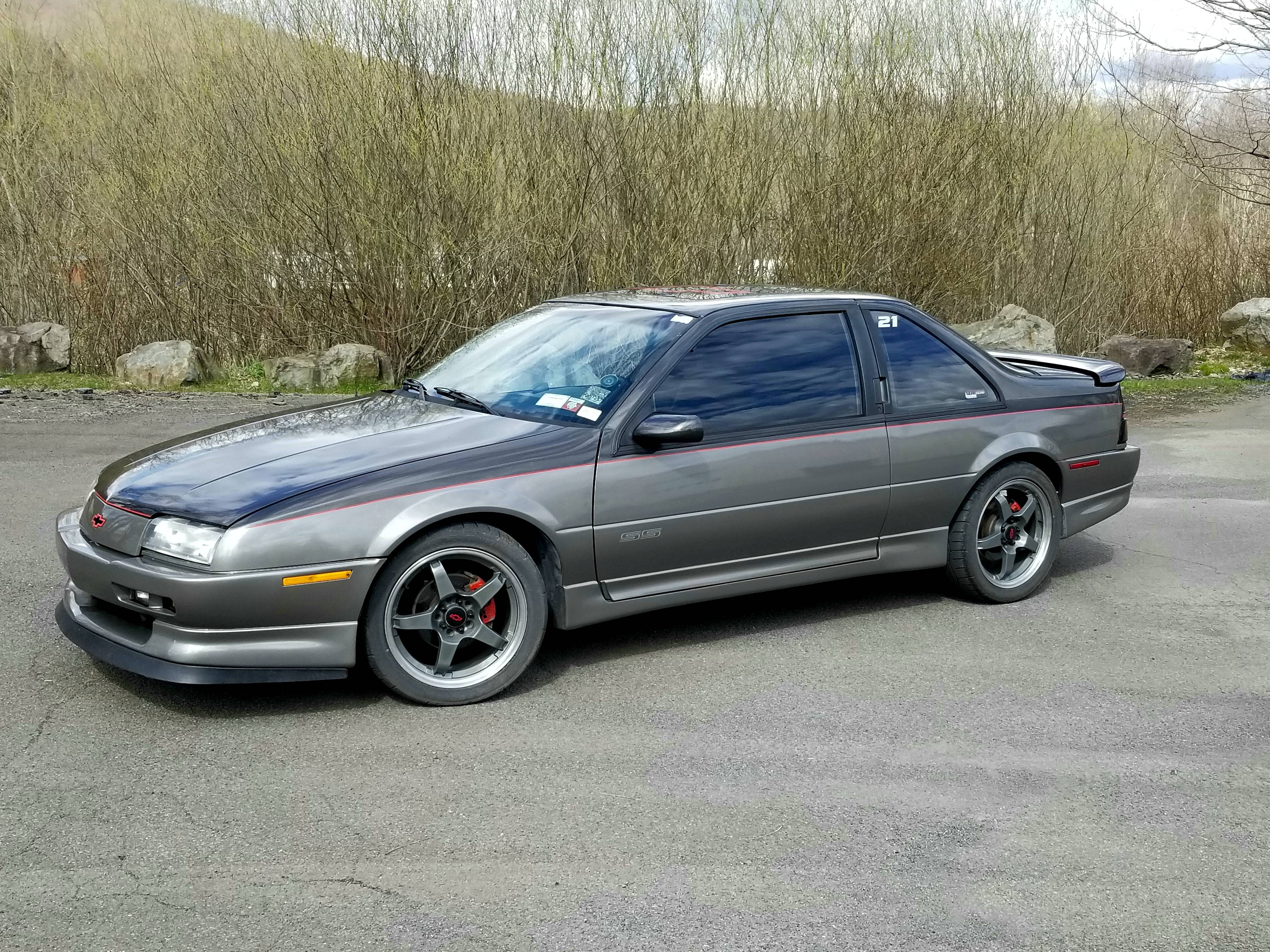 I implemented my fix for the fuel smell and weird driveability with a new FPR and some -6AN lines to replace the non-serviceable o-rings in the fuel rail. Had a friend TIG in some fittings that I cut down. The first pressure test I found a pinhole in one of the welds that pissed a huge fuel mess all over. But a quick trip back to his shop fixed that. The prefinished -6 PTFE hose is from Fragola...PTFE should never degrade or give the tiniest whiff of fuel vapor. The routing of the lines is simplified compared to the factory SFI setup. 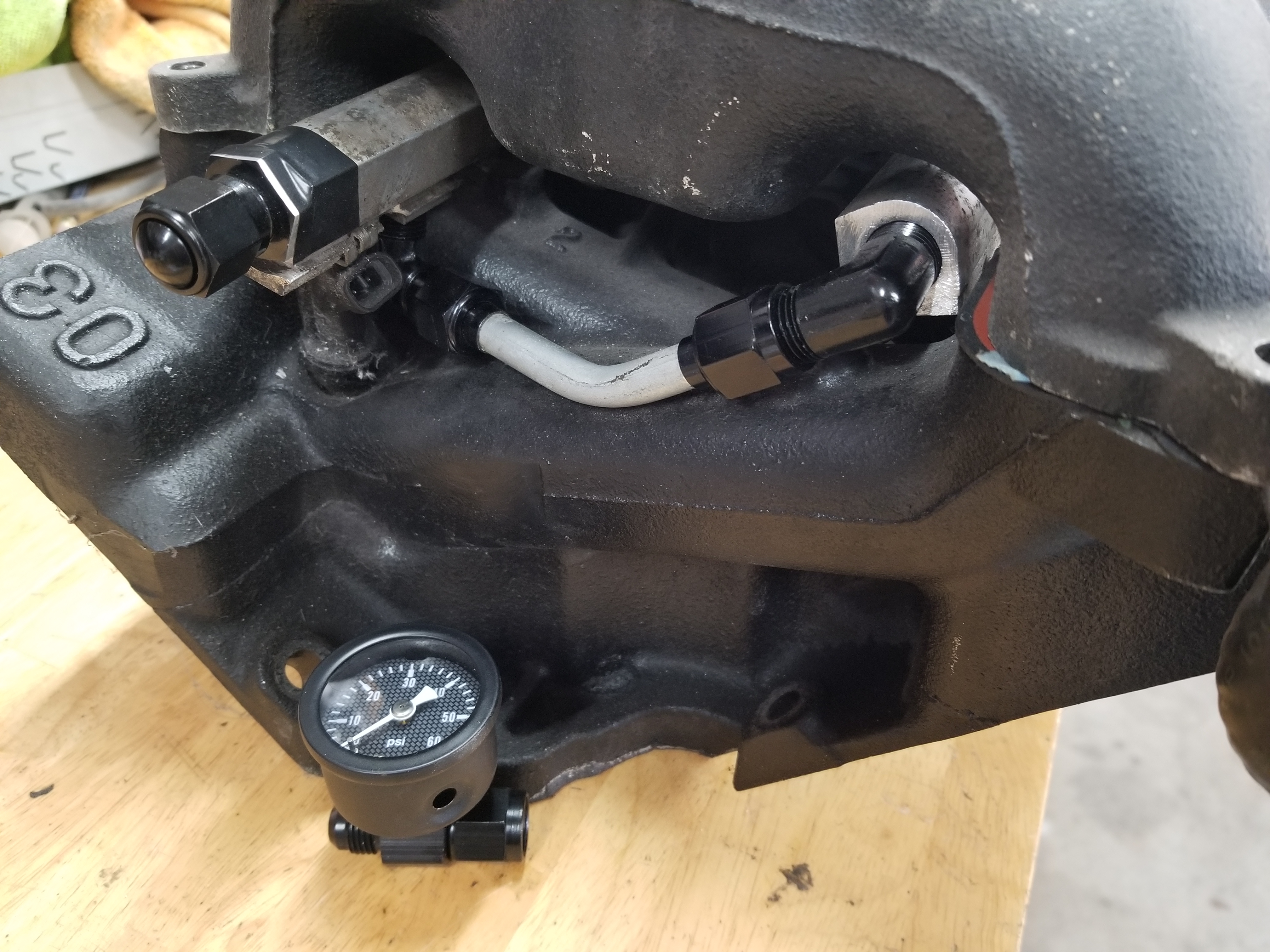 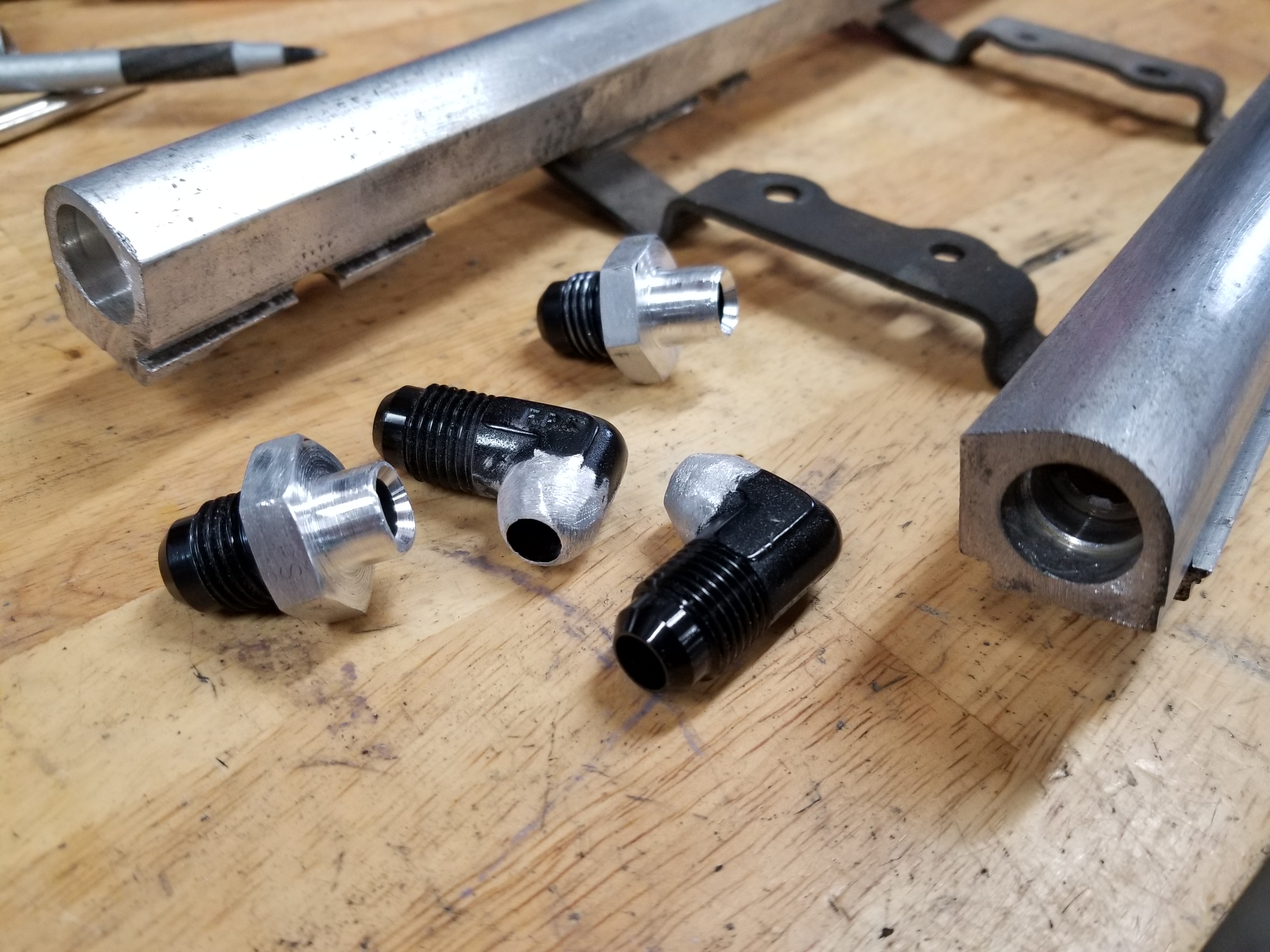 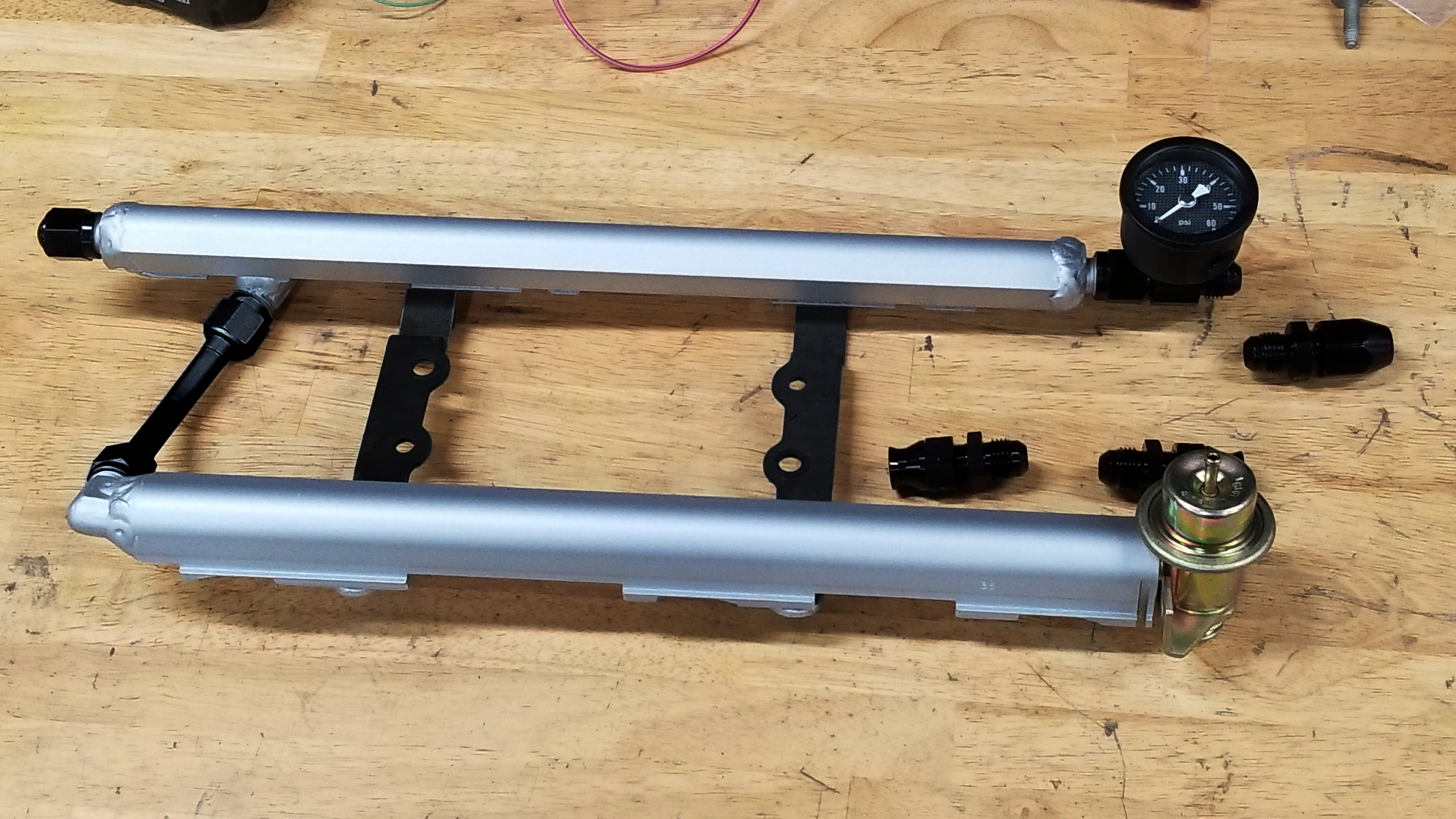 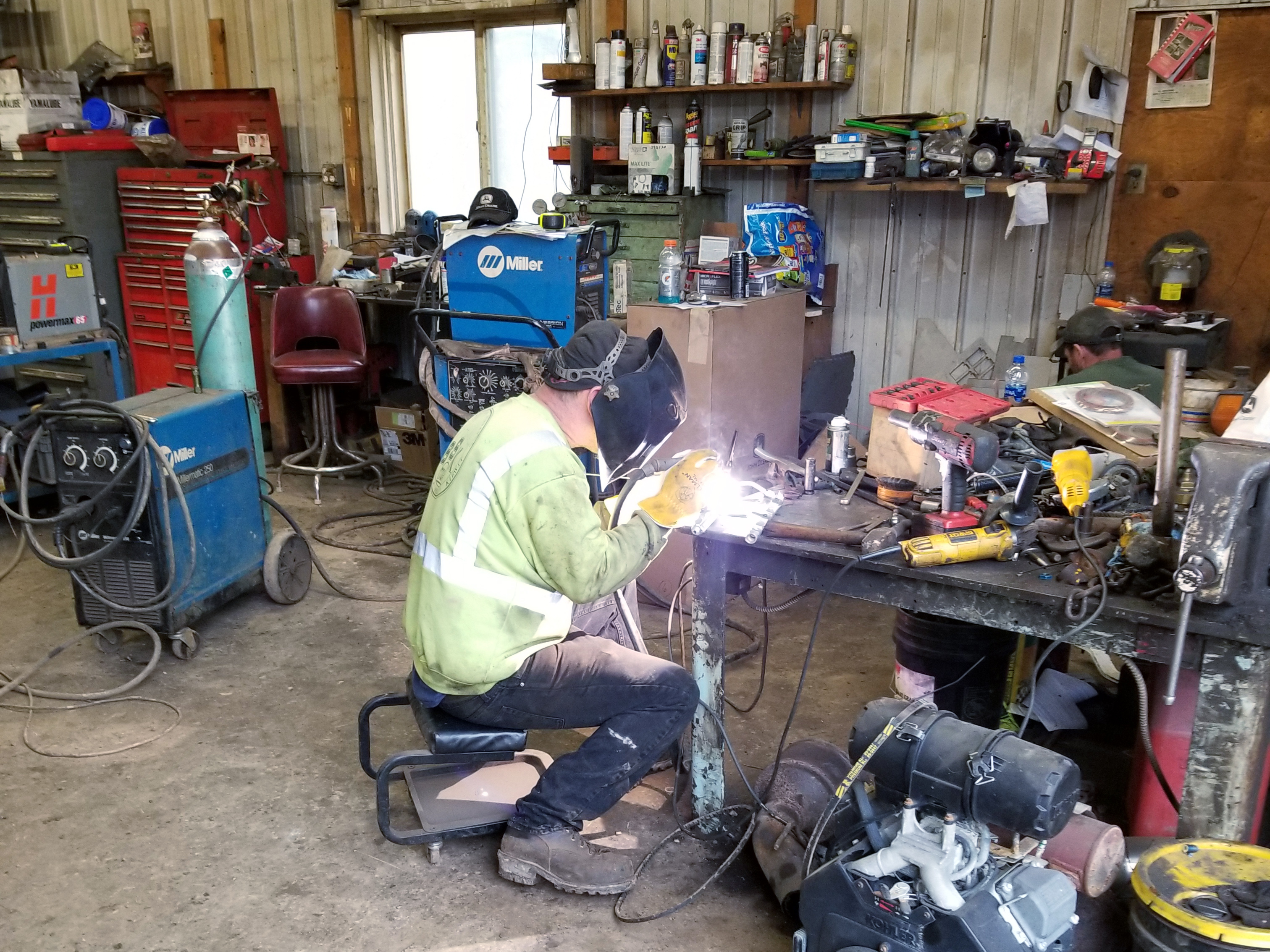 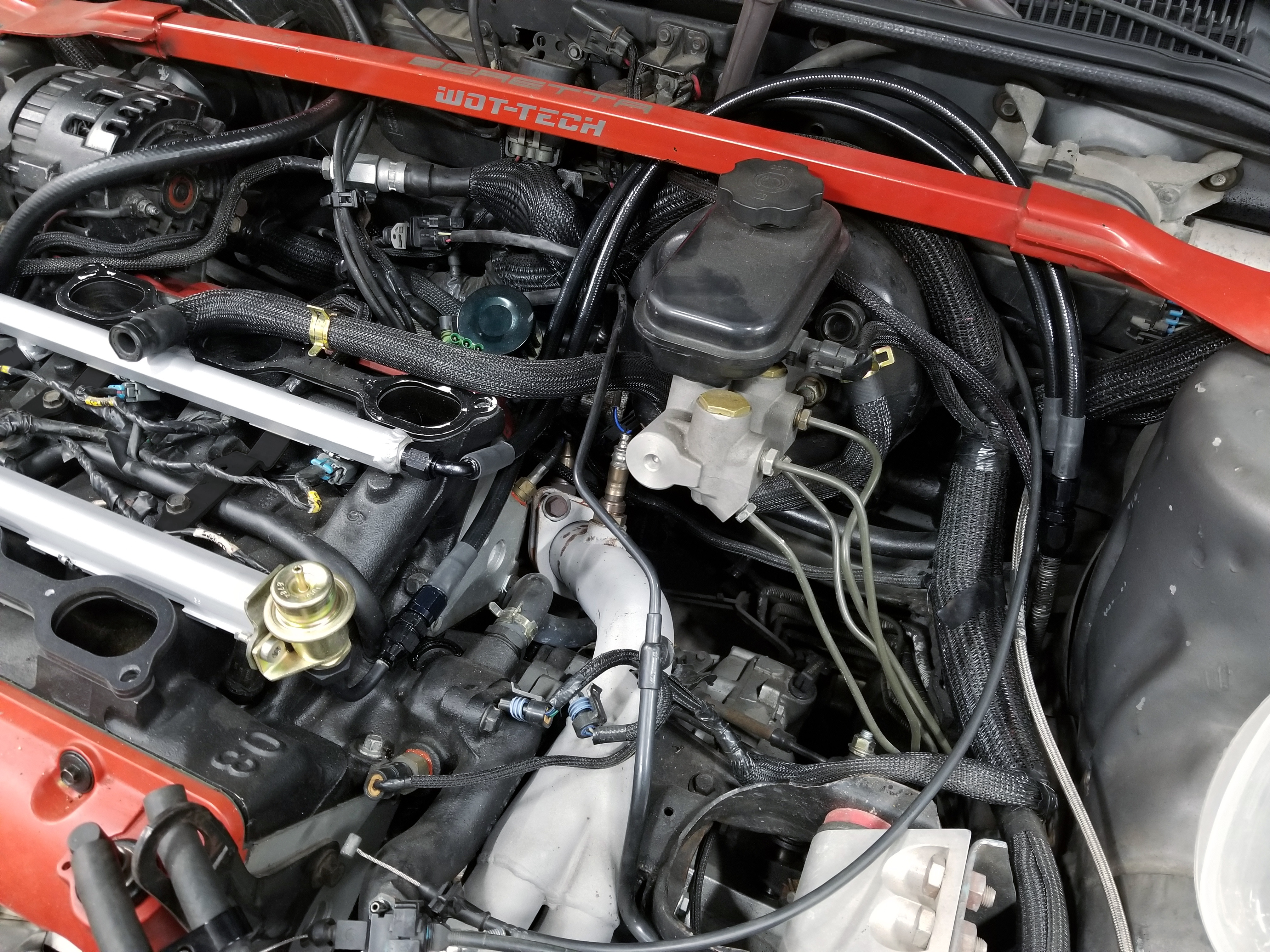 Took it for a quick drive and already see I'm going to need to retune. Makes me suspect the FPR may have been a little odd for quite some time and my '18 tune may have been with a mechanical flaw. But I think I can dial it back in pretty quickly. At least I hope. Free time is hard to come by these days! 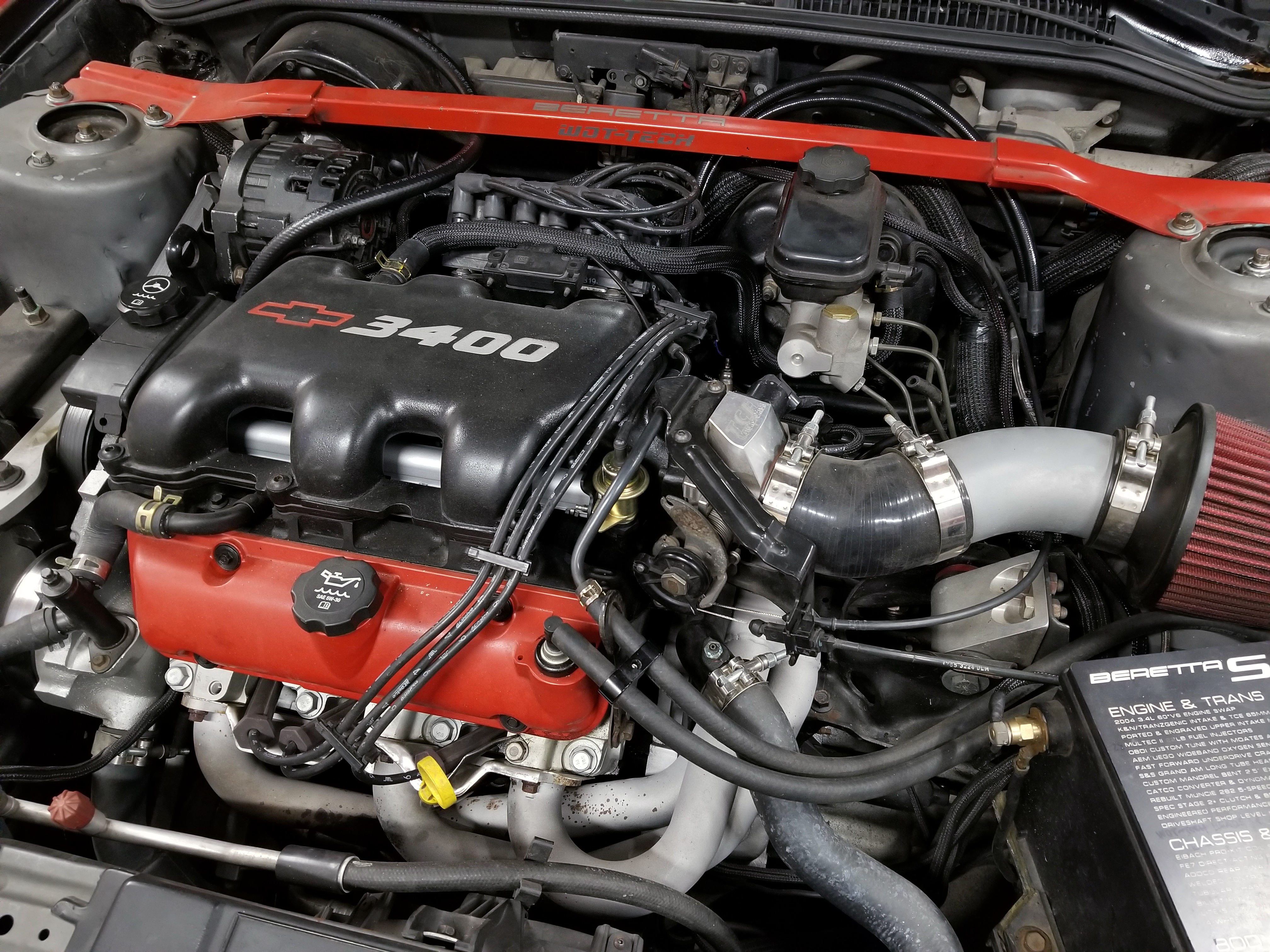 Nice! My GTU is STILL running around with the 'temporary' fuel supply connection I put in oh so many years ago for testing. I should be able to ditch about 10 inches of steel fuel line and hose by the time I get around to making it what it should be, but the '89 Berettas still used the old GM double-flare O-ringed fuel lines, just one more point where the 3800 swap would have been even easier on a newer car.

I worked with AN enough in aviation (what they are sourced from), and have to say that if I could be bothered to pony-up the cash for a supply of it, MS Flareless is about four worlds better. Basically the difference between a Cessna aircraft piston engine and a military jet engine.

BUT, the fact that AN can be bought so readily from everywhere from Summit to ebay makes a level of practicality that is hard to beat, and still so much better than automotive OE... I love that some of us are re-engineering some of the most basic of original components, and now getting a product superior to what GM was able (or willing, cost-wise) to do themselves. Innovation, creativity, and passion. You gotta love it!

I always thought AN was "Army/Navy" designation? There's a factory 25 miles from my town that does military electrical connectors that end up in a lot of aircraft. Crazy expensive stuff. Like $400 for a 30-pin bulkhead connector. It takes "crazy expensive" to end up $20 trillion in debt, though.

I never liked the L-body 3x00 fuel line routing. Seems strange to overshoot where the fuel needs to go by about a foot and then bring it back through a maze of stuff with some tight bends. Probably worse with the 5spd moving the engine back an inch too. I never did see how the MPFI lines actually run, because that stuff was already gone when I got it from Shane.

I actually had a NOS GM fuel/brake line bundle for my 95 that I ended up too lazy to remove the subframe and install properly out in a cold driveway. So I compression fitting'ed it and sent it. That was when the car was getting pretty rusty anyway. As I recall, that job was a real wakeup call to start looking for a new body. Worked out nice to throw all that in the 91 and make the 3400 basically plug-n-play.

AN is in fact Army/Navy

Whoa, old man is still creepin! Lucky for you, Covid has kept your record intact so far this year...haha

So I did go ahead and "delete" the vacuum reference to the FPR since I was going to have to re-tune anyway...and I was running out of VE in the tables, so I changed the injector constant by 20%, reduced base VE by 10% and main VE by 10%. Kinda funny how the BLM history (actually mixed BLMxINT history) shows a gradient between basially no change at the top of the MAP table to about 20% reduction at the bottom of the table. Almost like the injector is no longer a variable flowrate anymore at a constant pressure! haha Ultimately I'm hoping it will help calm some of the idle oscillation I get sometimes. 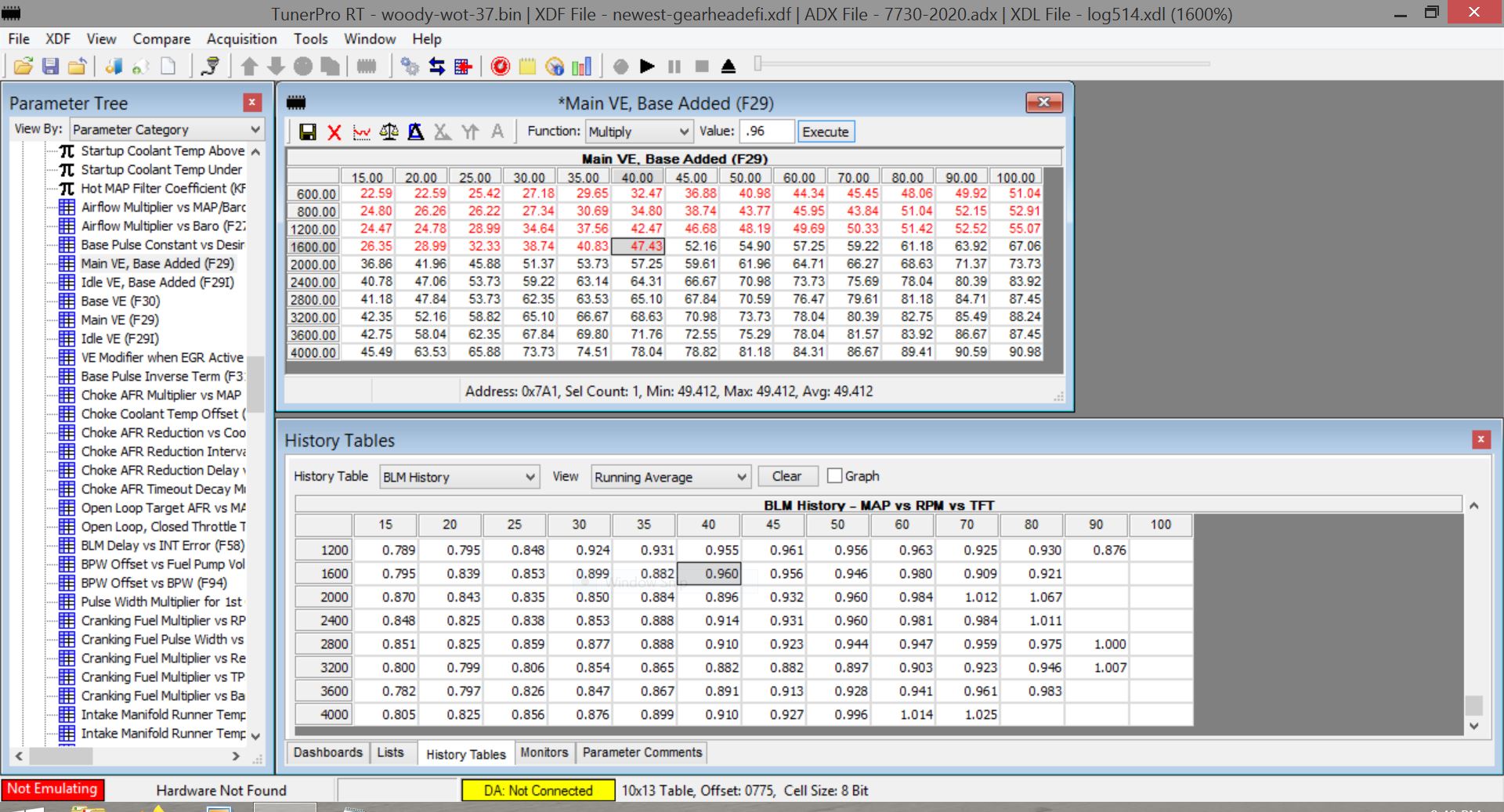 Barb, (My God that was a lifetime ago) at 119 lbs ran the quicker times.

So what you're saying is I need to loose 100lbs... maybe more to run that time... LOL crap I just added power windows, a hitch, new carpet and updated some wiring... I need to get on the tread mill...

3X00-Modified wrote:So what you're saying is I need to loose 100lbs... maybe more to run that time... LOL crap I just added power windows, a hitch, new carpet and updated some wiring... I need to get on the tread mill...

So...deleting the vacuum reference did nothing to improve the idle oscillation. If anything, it may have been a hair worse. Datalog showed idle swinging from 600-1200rpm and the MAP going from about 25-45 along with it. IAC and INT moved around too with the injector pulse width moving from about 0.5-0.9msec and AFR swinging 12:1 to 18:1. And I was schooled on Facebook about how the vacuum reference is actually there to keep the pressure differential constant. When the manifold is under vacuum, that reduction in pressure actually makes a constant rail pressure act like an increase in pressure. Duh. I should have thought of that. So I hooked the reference back up.

BUT! I did find out GM created "Idle Mode Fueling" for the $A1 mask to improve idle. I recall trying out "alpha-N idle" years and years ago (what it was called in the XDF I was using) and it was terrible. Turns out that XDF had the wrong definition for injector flow and and the 22lb I had it set for was actually about 10lbhr. So it was WAY too rich. The "A1 using GM doc" XDF that I got from gearhead had the IMF injector math correct, and was an immediate huge improvement. I had to fudge the math a little bit and tell it I had 32lb injectors instead of the actual 28s to get idle fueling just right, but now the MAP only moves a few numbers and the AFR stays within a point and idle varies by less than 100 RPM. I'm happy with that. So now I'm logging and rescaling the VE table again, but it's running damn good.

Car is running awesome, I"m super happy with it. But my muffler started rattling...so I tried out an experiment. I really like the Dynomax valve muffler I've had on it, but on deceleration it does let out some little farts as the pressure builds enough to open the valve and then close and then build up again, etc. What I'd really like is a stock 3.1MPFI sound, but with decent flow that won't choke a modded 3400.

I looked at a Flowmaster 70 and it looked like it could be a nice option. It's made to tone down big blocks that do a lot of towing. It's a long case with several chambers and configuration would have worked. But it was almost $200 for aluminzed junk that would only last a few years probably. And my short commute is really hard on mufflers. 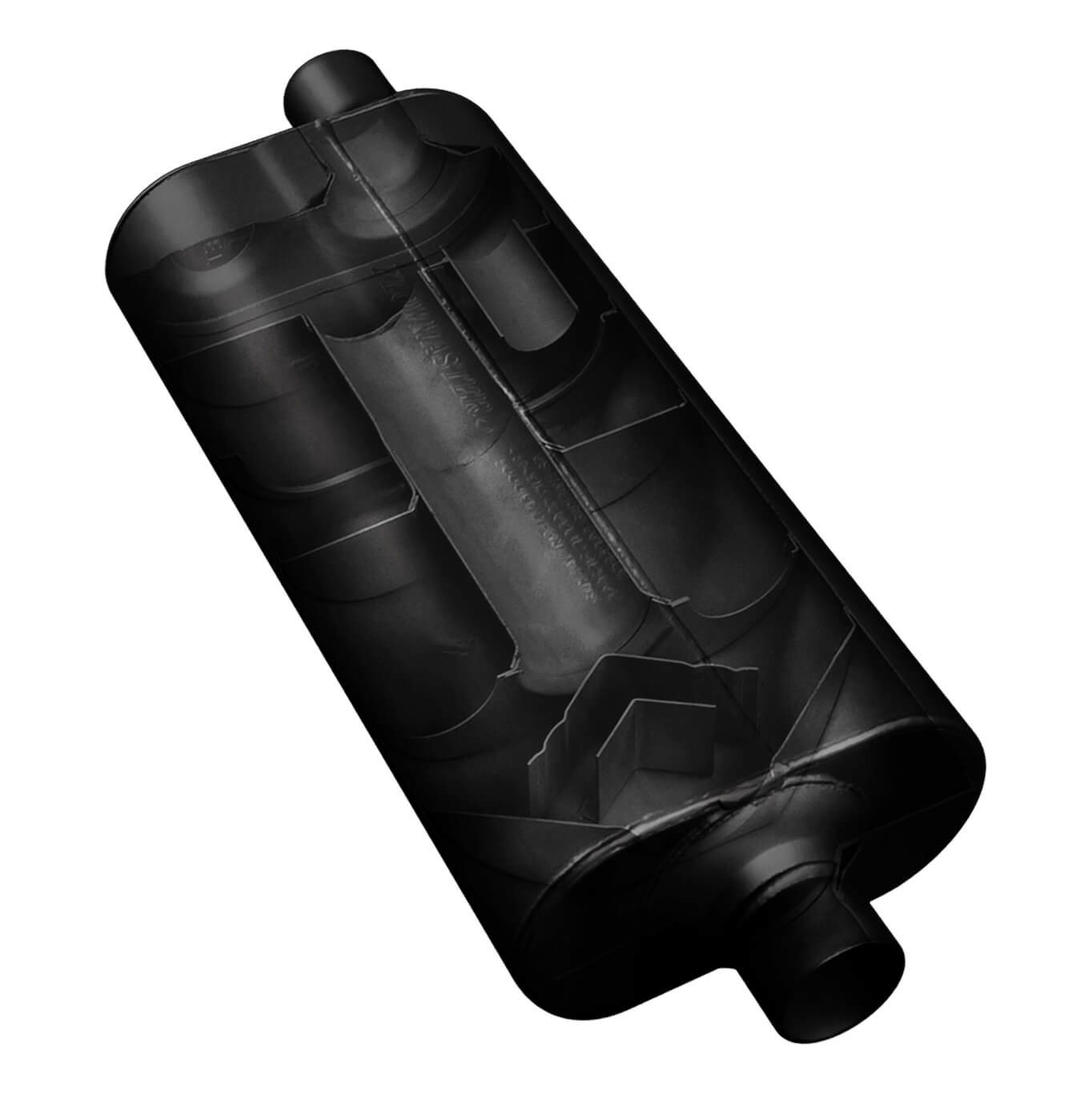 So for this iteration, I got a single chamber Flowmaster style and a straight through fiberglass packed Magnaflow style to stack in series. Cost less than $80 for the pair of them in stainless. I thought it would sound best with the fiberglass first and then chamber, but it was actually better the other way around. I was hoping for volume reduction and good tone. But it's kinda meh. I don't love it and don't hate it. It's good enough for now, but I do have another idea to modify my ol' Dynomax with the valve and see what happens.

First time using the old man's new shop. Bastid stole the welder to build his work bench so I had to go over there. But the amount of room is really nice, and there's even a babysitter included. haha 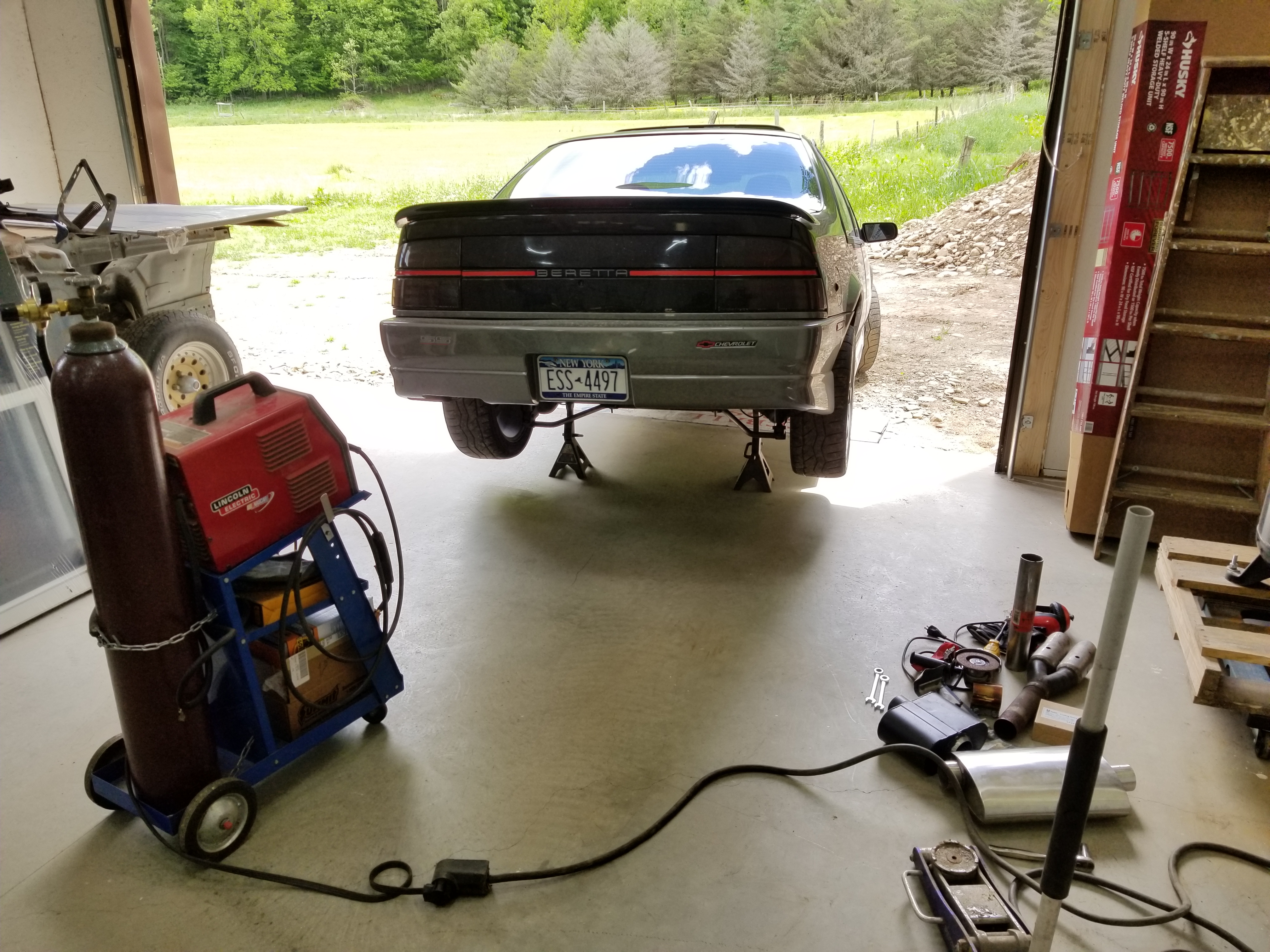 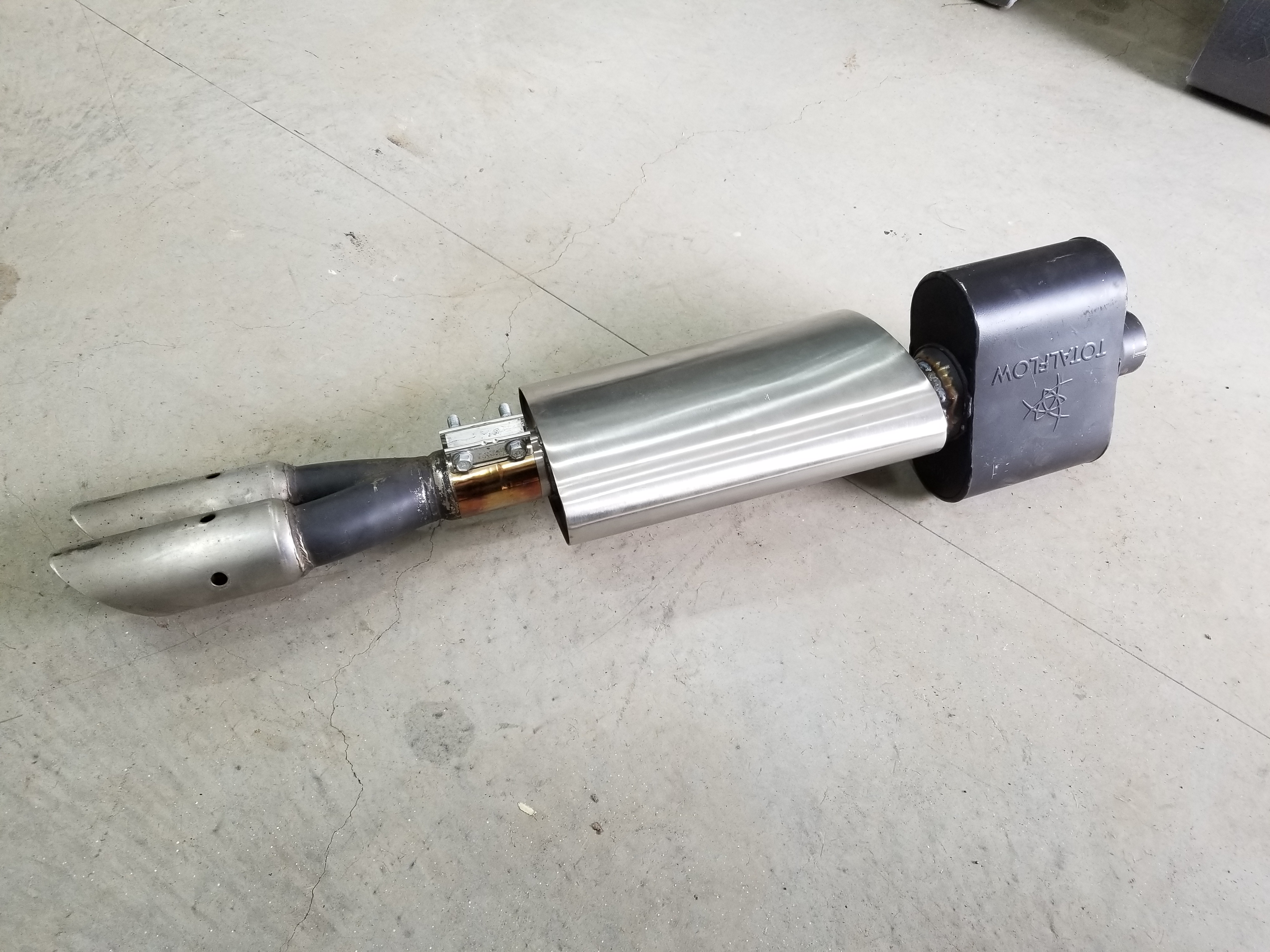 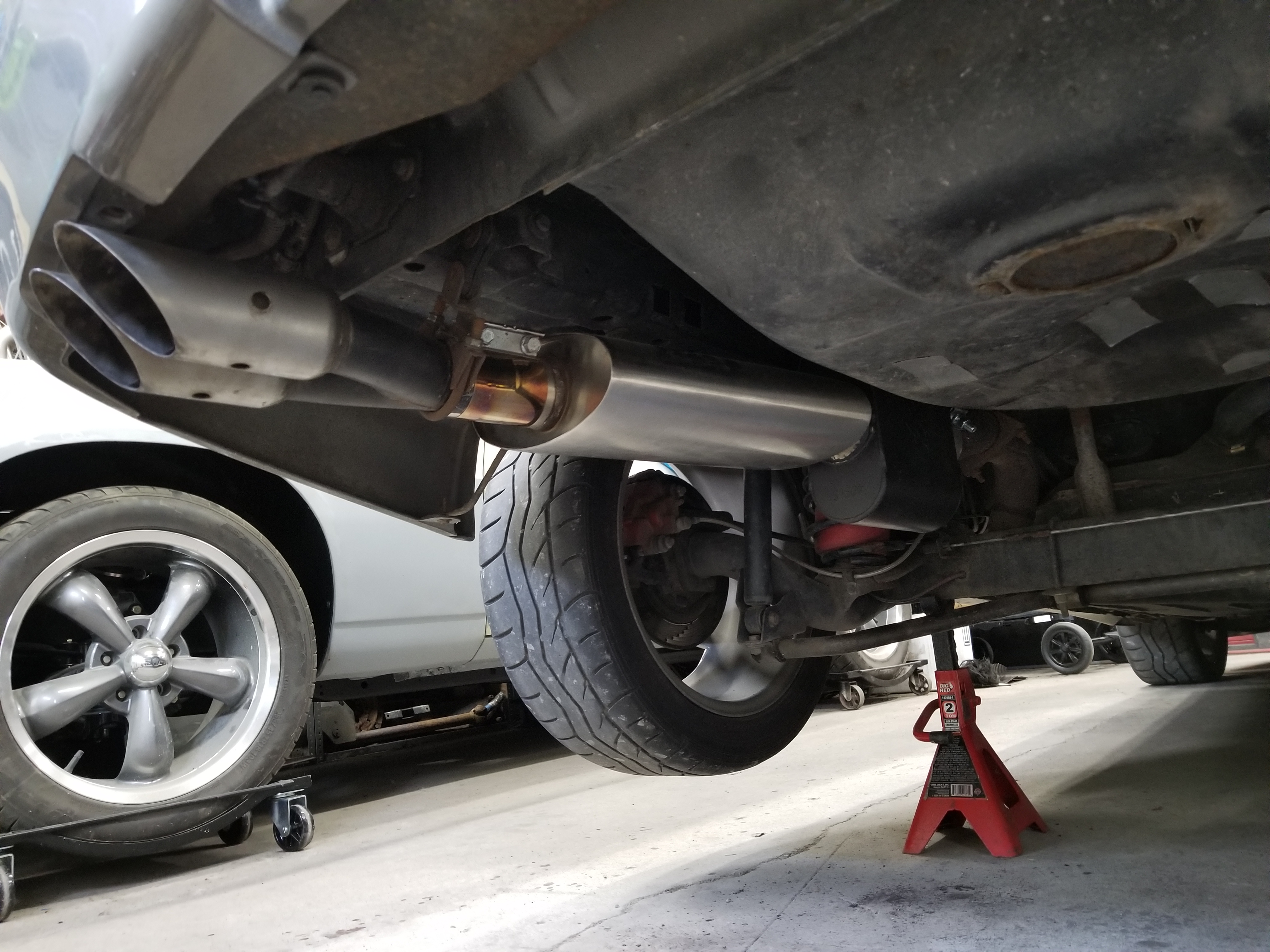