My tint is illegal and I only got pulled over in PA for it... LOL go figure.

I've been pulled over for tint quite a few times, but written just once. And everything I drive has been tinted for 10 years. Even the Subaloser was...

Front plate I've been pulled over for once in the Camaro, but not written. I used to put the front plate for the 95Z in the windshield but that changed when I went poly mounts. Just reason #78978438736 to head to NC. haha

Concord is beckoning you... there are some houses your style not far from us.

My gearhead neighbor a couple houses down actually just got his house sold pending the closing. And guess where he's headed: NC. Problem is the housing values in my area have dropped even in just the 3 years since I bought mine.

I had the misfit at Berettafest. Mileage was tits, though!

Woo woo car is paid off completely. 49k on it. Just put some new plugs in it and cleaned the air filter. It has been stuttering up hills intermittently and apparently that comes from spark blowout when the gaps open up over time. Who knew? #boostrookie

I see I'm only about 4 years behind in photos too so I'll throw a few up.

Added LED DRL's and wired a plug&play relay harness to delete the headlight DRLs...zero splicing in the factory harness. Low beam and DRL shares the same wire and it pulse width modulated to reduce intensity at DRL mode. So I triggered the lows with the parking light circuit and was able to retain the auto headlight feature.

Bought some leather seats from a salvage place off car-part.com. Threw an error code at first when I plugged them in because the seat belt cartridges blew. But that was an easy fix. Also bought a cheap boost gauge from Aaron when he parted out his Cruze mods. But that only worked about a year before it died. GlowShift junk.

Took it to an Optima Ultimate Street Car event, but it's not much of a racer. haha

Wailed a turkey with it on the way back from that NC trip. But Esurance is great...couldn't be happier with them. And I got annoyed with 6000k LEDs for DRLs and yellow halogens so I put in LED headlights. They're supposed to be good in halogen housings because of the same focal length as the filament and so many more lumens blah blah...but I'm underwhelmed with them as far as usable light output. And the cooling fans on them are loud. 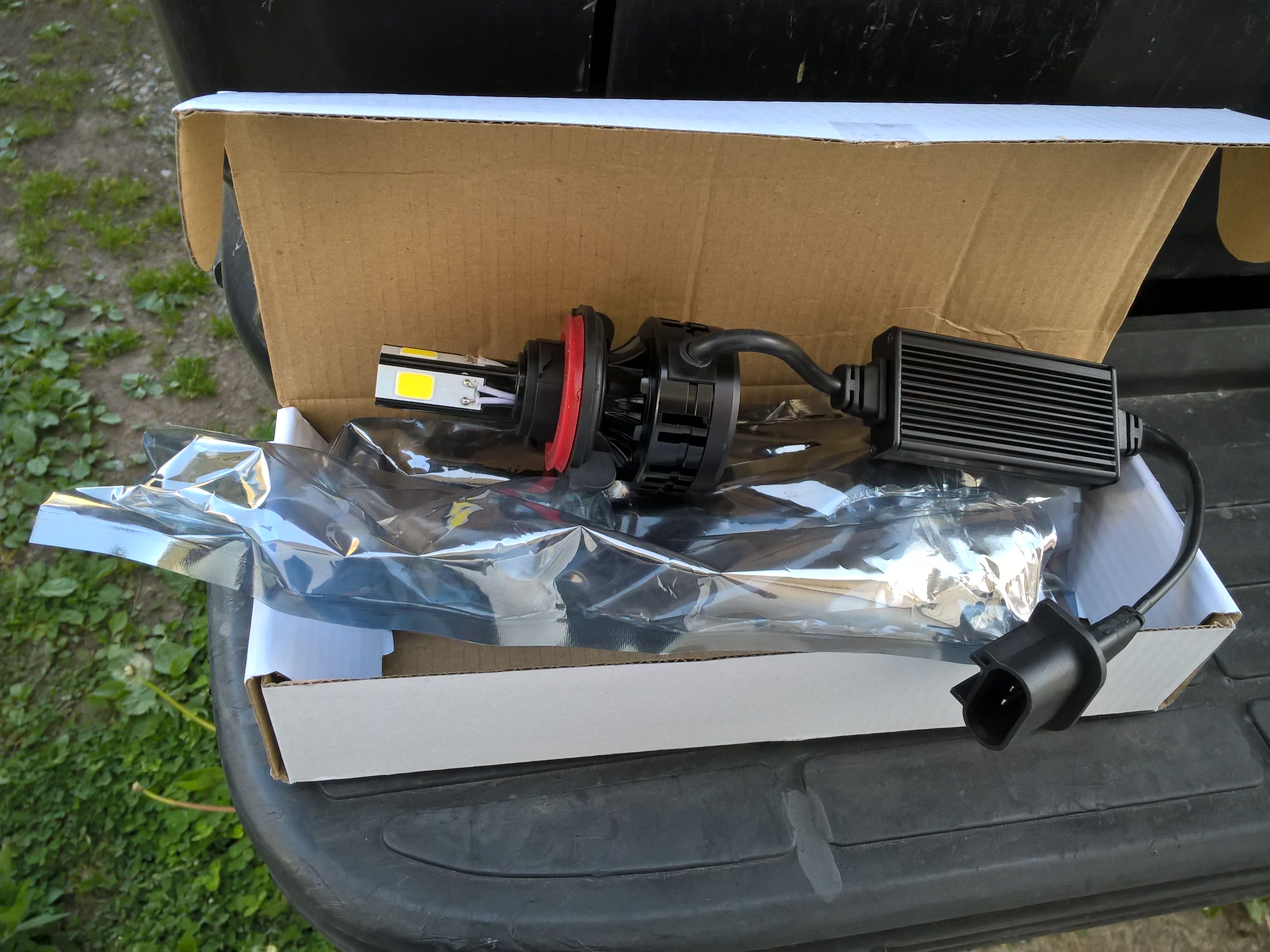 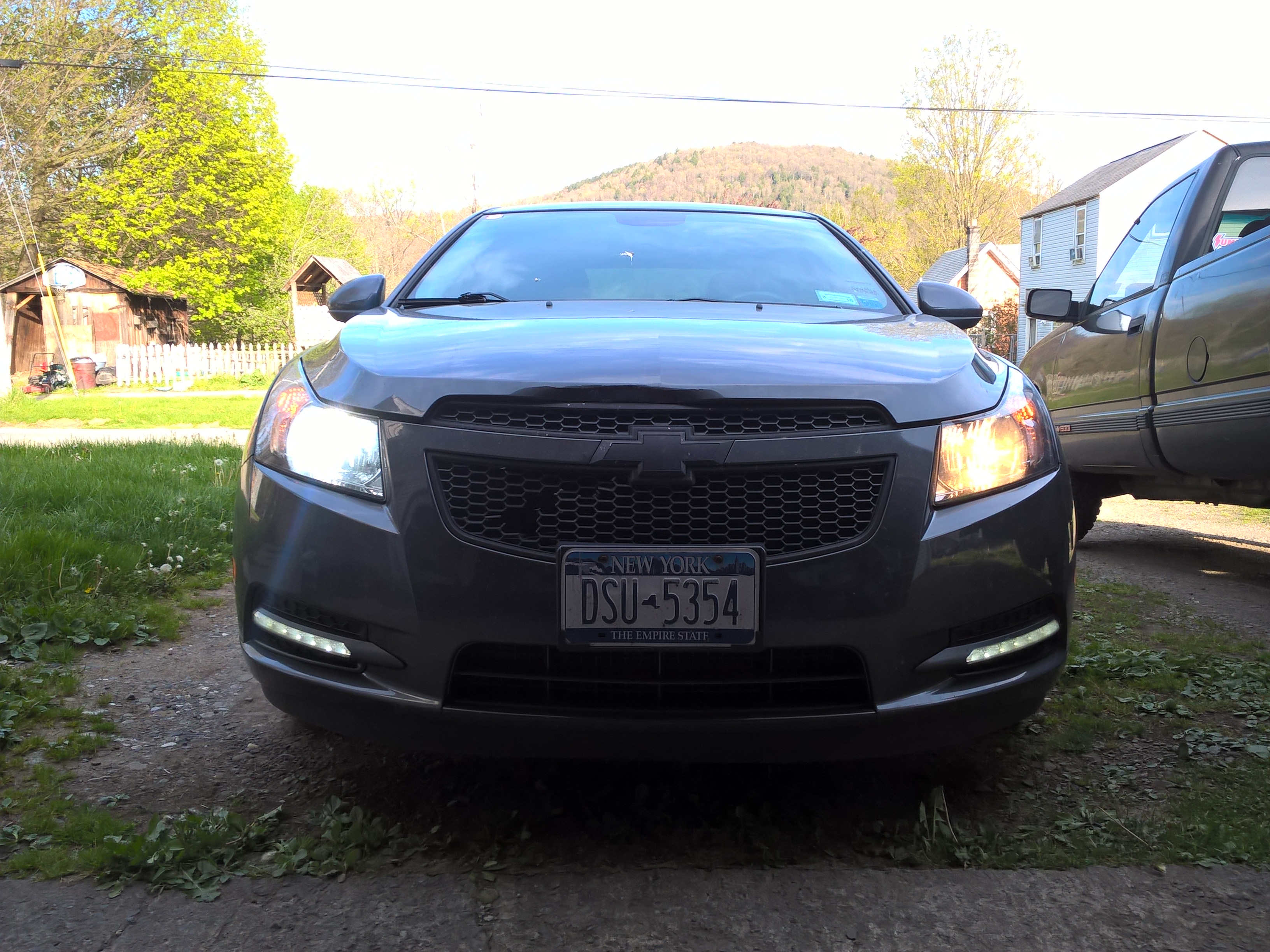 Overall it's been a solid car, going to hold on to it for a while. The new generation Cruze has a diesel/6spd option, but the body style is kinda ugly and the new 1.6L has less power than the 2.0L. And, a new tune from Trifecta for $400 is worth 42% more hp and 40% more torque by upping the boost from 16 to 22psi...not a bad bang for the buck. haha And since the powertrain warranty just expired I think we'll go ahead with it. For that cost, why not?

You can order an airbag cover from Austraila and convert it to a Holden....

Those DRLs are downright classy. Ive been wanting to try LEDs but ive seen where the light output doesn't reach far enough. And they were pretty high end lights too. Im gonna try em on some fog lights eventually where I won't really care what the performance is. I have seen them with woven wire ribbon heat sinks instead of the fans.
I had a Sonic LTZ auto loaner car for a weekend. I remember it having heavy lag off the line followed by full spool (like an on off switch) then it would take off like a bat out of hell. It was hilarious. Alot of fun to drive

One of her LED headlights just crap the bed. Looking at the ones with the ribbon heat sink. Hoping for something with better forward light output. It seems to be brighter up close but not travel as far. I know HIDs would throw the light further, but they would be worse for incoming traffic.

woody90gtz wrote:It seems to be brighter up close but not travel as far. I know HIDs would throw the light further, but they would be worse for incoming traffic.

This is 100% my experience with LED headlights in the Euro Beretta housings.

Im a Xenon guy myself. This is the kit ive been using lately... $72 Lifetime warranty.

Put a set in my Integra a few years back and 2 sets in my Bonneville last year.
The big ballasts seem to be generally bullet proof. My GTZ has a slim ballast set(different brand) and one side is flaking out. Ill have to try the relay trick on that one and see if its just a voltage drop issue.

I've heard good things about DDM in the past from the truck guys. I see they have an H13 high/low option. I wonder how that works. Never seen an HID bulb that was high/low.

I had a DDM kit in my Grand Prix for 4 years and never had a problem.

A lot of factory cars that are Bi-Xenon have a solenoid fired flat shutter that drops down in front of the bulb to create that crisp cutoff line. I put some new bulb housings with an H4 base in the Bonneville. Then I bought a High/low H4 HID kit for the low beams. They had a bulb mounted solenoid that fires a cylinder shaped shutter to cut off the upper part of the beam.

That is a nice Cruze, glad you guys are treating each other well! I've worked on and driven both the turbo Cruze and turbo Sonic (and yes, those Sonic headlights are sexy!) -both are reasonable, fairly fun, but not really impressive -except for the fact that they are only 1.4 Litre engines. The ones I drove were autos though -that usually doesn't help either seat-of-the-pants performance feel or fun-factor, IMO. Glad you got a 6-speed! The Sonic I worked on needed a turbo swap (really low mileage and driven nicely, but ignored oil-changes -DON'T DO THAT!). The turbo's oil return-line is plastic at the bottom, where it goes into the engine (on the year I worked on, at least). It coked-up with carbon and burned oil, melted and distorted, and eventually plugged-up completely, frying the turbo's bearings from lack of lubrication. Then the oil in the stainless steel feed line that is routed too close to the exhaust manifold got cooked, so we had to replace everything. The dealership kept a couple of the turbos on the shelf -what does THAT tell you? Thousands of dollars in repairs... The Cruze had no real drivetrain problems, but we saw it often for little things -a crack in the intercooler, a blown radiator hose (sad, as I've seen hoses more than three times older than that car still wrongfully in service and doing fine), some electrical issues, etc. Overall a decent car though.

I have a set of LED HIDs on the '73 Plymouth -motorcycle 'Daymakers'! I have them pointed about as far down as I can and still see for distance, I have only been flashed two or three times over the last year+, but about 45% of the cars out here are HID-equipped, and 65% of the cars have their headlights aimed too high, so I am reaching a point of not giving a crap about oncoming cars (not quite yet though -I still try to practice what I preach!). After half an hour or so of nighttime driving with those lights, I want a pair of sunglasses! Seriously bright, so it CAN be done with LEDs. I also have some Xenon HIDs with plug-and-play ballasts I want to try eventually. I just haven't yet because they are a greenish light output, and I've been saving them for the Teal Indy project car. They did work great though before I pulled them and parted-out the donor car.

For that much performance boost, with no more warranty concerns, you should do the tune -you know you want to! I like those seats too, very similar to the Audi set I snagged last weekend for the newest Camaro.

Users browsing this forum: No registered users and 6 guests