So ive acquired two cars this year that I plan on dropping LS engines in someday.
My dad bought my first car for me when I was 16. It was an old lady driven 86 Bonneville we found for $2000. It was all original and a little tired with a horribly slow Buick 3.8. I knew nothing about cars at the time but Ive always been hard on equipment and soon got a crash course on how to replace the alternator, radiator, brakes, stereo, exhaust, shocks, fuel filter.... and learned how to rebuild and tune the 200cfm rochester carb which lead to a small manageable fire in shop class, how to adjust the kickdown cable, and how to delete the smog pump when it locked up. I also smoked 2 transmissions, and burnt up an ecu driving through water.
After a year I got a second summer job and bought my first Beretta. A 92 GT auto that held up far better to my driving style if you want to call it that. My dad sold the Bonny and ive missed that car ever since. I tried to replace the voide with a 84 cutlass at one point but it just wasn't the same.
Over the years I would randomly scan craigslist or ebay for one without the intention of actually getting something any time soon. And then I tripped over this thing on c-list Chicago. It looked like it met all the criteria. No rust, sedan, preferrably with a v8 and it had to be an 86' just because. We drove down to check it out and I couldn't say no. Thats the least excited I have ever been to buy a car as I really don't have time or room for it and I don't need the distraction right now. 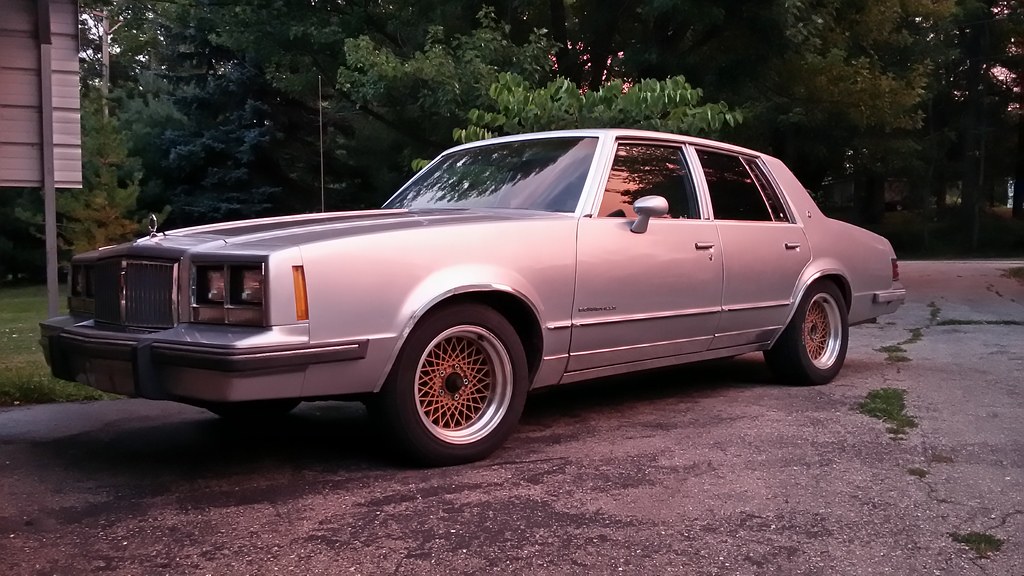 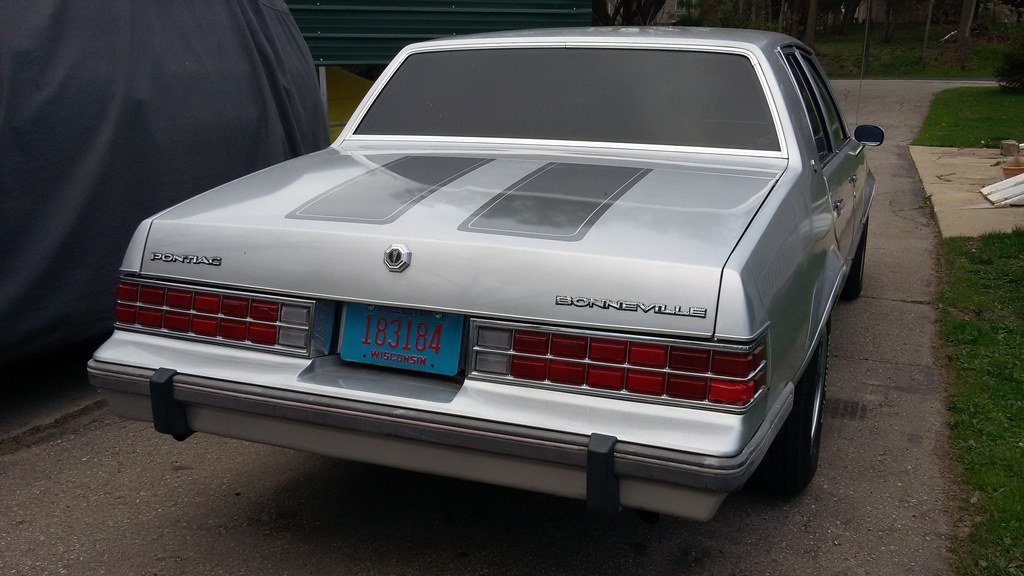 20150501_191546_zpsph49yv1x by GodlikeMotorsports, on Flickr
Its kind of a hood rat with some small dents here and there some missing trim, ripped seats and a very low budget paint job. It is however a rust free California car. Its a non vinyl roof sedan (no rivets to deal with), with a horribly slow Chevy 305, 200-r4 and a 2.41 open rear end. It had a ratty set of 2nd gen Camaro wheels on it.
The nice thing is its a driver so ive been using it to get to work. I really like it as a cruiser. The previous owner had the exhaust done with cat delete and a single in dual out turbo muffler which actually sounds great. The paint job looks nice from a distance and the car actually looks hot in silver. It has power locks which don't work right now and crank windows. Fun fact: 4dr G bodys have fixed glass rear doors. I have yet to find one that rolls down. Mine has manual vent windows in the rear doors but there was a "power vent" option. I wan't to find a donor for that conversion.
I did a quick tune up when I got it because it was getting 12mpg. nothing changed and it had a cel so I checked the code which told me I had a faulty prom. Being an 86' it has what I call a smart carb with practically every sensor a efi motor would have. I opened the ecu and someone stole the prom! It was defaulting to max rich. So I found a complete ecu off a camaro on ebay for $60 which bumped my mileage up to 20. Much more like it considering its got tall gears, tall tires and something like 165hp.
This car is at the bottom of my project list but I want to take my time and do a nice clean turbo build with a 4L80E which requires a little hammering in the tunnel. I think the hardest part will be trying to create the right blend between a pro touring track-worthy setup and a comfortable street car. I wan't to be able to take it on a trip without rattling my teeth out or going deaf. But for now Ill drive it. Eventually Ill look into brake upgrades, a rear end and aftermarket control arms. 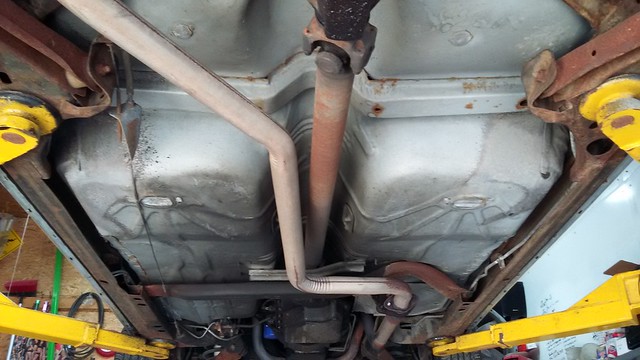 20150411_172500_zpsxzu9snhc by GodlikeMotorsports, on Flickr
Im trying to come up with ideas to modernize the interior tastefully while keeping the old school dash. Lots of Chevy guys swap GranPrix dashes in for easy gauge swaps but no one seems to be aware that the Bonneville dash is the same part number. I want really comfortable seats and a cool center council...

The other car is an MKIII Supra non turbo. 5 speed manual with a "sport package" which includes an 8" 4.30 rear end with 4 pinion 1.5 way lsd, TEMS Toyota Electronically Modulated Suspension and most importantly head light squirters.
A friend gave it to me because he lost interest in it. I actually got to drive it about 15 years ago when he bought it. Its sat along time now though and the motor might even be locked up.

I would like to do a budget swap on the Supra first and kind of learn on this car. I want to get a T56 and possibly a truck block but I want to make sure im not adding weight. These cars are fat ladies to begin with. An ls1 would cost more but could save me money in the long run as the intake manifold and oil pan would clear everything from the get go. I could do a trans adapter plate but the W58 annoys me. They don't have a first gear syncro and they wont hold a lot of power Im told. Eventually Ill pull the motor and trans and sell them off. If I could get it running first the 200hp 7M-GE is worth decent money...

I wont be starting either swap any time soon. Right now im concentrating on finishing my house remodeling projects so we can sell it and move on to something bigger and better. Also
-my GSR needs some work before next autocross season
-I need to get my 69 Impala finished so I can sell it
-I have a 87 VW Fox to sell
- I have more to do on my GTZ
-my Tahoe needs brakes
- I need to get the shocks on my snowmobile rebuild
- and I want to replace my Z26 with a newer DD.
Ive managed to collect a lifetime worth of project cars at 33 years old.
Last edited by Godlike on Mon Oct 02, 2017 10:55 pm, edited 3 times in total.

I don't think I've ever seen a Bonneville of that vintage. Way back when I did have an 83? Regal which had those power rear vent windows you are referring to.

I doubt the LS would add much weight to the MK3, in fact it might be LESS weight if you go with an alloy block.

The F-Body LT1 was very similar in weight to the 7M-GTE. This was swapped when having an LS1 would've been a small fortune.

I remember a Pontiac wedge back that you could only roll down the rear windows half way. They wanted to make sure kids couldn't climb out(they still could). So they made the rears fixed later. Yes I also remember the power rear vent windows. Kids thing again, so they could have air and parents could open them for the kids or control when they were opened. Oh all the stupid ideas in the 80's.
Well at least it has a 305 and my favorite trans(which I have never owned) that is far better when built than the 700r4(for gearing). Don't knock the 305 too bad, it doesn't have piston slap like the LS.
The GTA wheels look nice on there!

Your selling the yellow Impala? I remember that video of you drifting it around!

Good luck on the new house/shop - it took 10 months to sell and build my new place.

Well he is Godlike...

Well he is Godlike...

Brad is the man!

Well Im definitely falling behind I can tell you that. I got so much more done when I worked 2nd shift. I could work on cars 4-5hrs every day before work and then bring parts in to clean/ rebuild / fabricate. After 5pm all the big wigs were gone and I had the shop to my self.
Now with daylight savings time I get home and eat dinner and its dark.

Stop out Mark, your always welcome.

bonecrrusher wrote:Your selling the yellow Impala? I remember that video of you drifting it around!

Good luck on the new house/shop - it took 10 months to sell and build my new place.

Those were good times. Heres the vid from the year I got the car.
https://www.youtube.com/watch?v=xDvVK5f1now&index=25&list=PLgnXf-DDSS7daRxe2je2KIBATArrvJjBU
This is about how it sits now. All I have to do is hang the rest of the chrome and buff it. Just don't have time 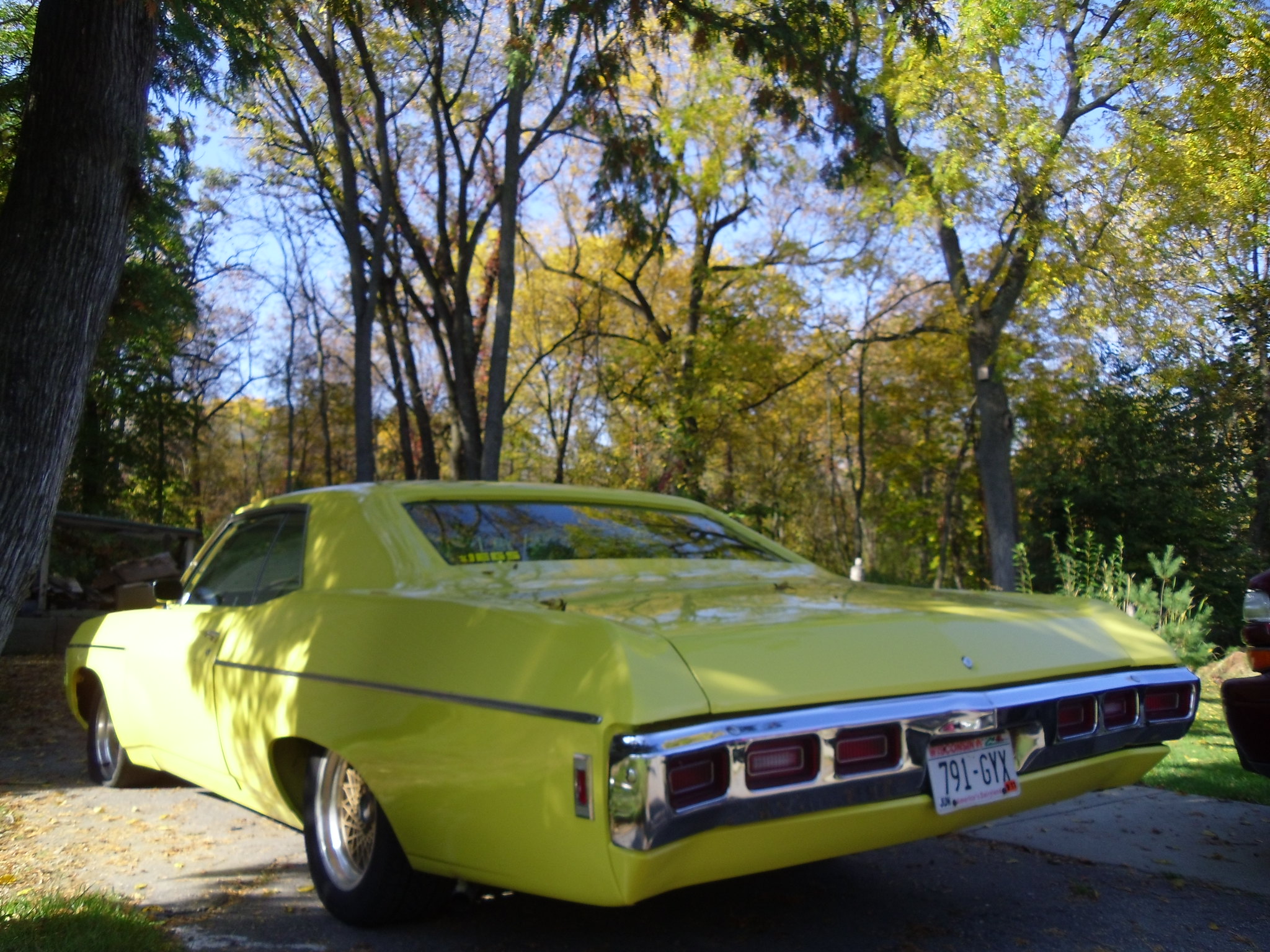 Love the Dukes of Hazard driving in the big ol girl!

I was jonesing for G-body wagon back in the day. A turbo LS swap would be such a sleeper in one of those!

You're on the right track with selling stuff, I had to go the same route and have never been more automotively happy. My fleet is basically down to 2, though it could be 4 if you talk to the State of Iowa... It's nice to only worry about keeping the DD healthy and finding a garage so I can get the GT up to the Des Moines area.

Focus on the projects you can sell. You can't sell them if they aren't "done" and they aren't doing any good weighing on your conscience just sitting around. Seeing the list cut in half will feel good.

I totally agree. Some times I think about how nice it would be to sell all 7 cars and buy one cool one. But that will never happen. I would hate to drive a really nice car on salted roads and I get sick of driving the same thing easily.
Made some headway last month. I Traded the fox to someone on Clist for a 06 Simplicity rider. Basically swapped one project for another. At least it doesn't take up as much space.
I installed my new catback on the GTZ and started tearing into a rusted out brake line on the Z26. Soon all but the supra will be able to move under its own power should we sell the place and move out.

You going to stick around Stoughton?

Users browsing this forum: No registered users and 2 guests