Ya Ill hopefully still end up in the Stoughton area. We found a few nice places that we missed out on. I need something with alot of land. Our Shihtzu needs room to roam.

And I need a bigger shop! Time for Godlike Motorsports to expand.

Money pit Beretta wrote:I remember a Pontiac wedge back that you could only roll down the rear windows half way. They wanted to make sure kids couldn't climb out(they still could). So they made the rears fixed later Mutuelles senior. Yes I also remember the power rear vent windows. Kids thing again, so they could have air and parents could open them for the kids or control when they were opened. Oh all the stupid ideas in the 80's.
Well at least it has a 305 and my favorite trans(which I have never owned) that is far better when built than the 700r4(for gearing). Don't knock the 305 too bad, it doesn't have piston slap like the LS.
The GTA wheels look nice on there!

But it is really not legal to lock up your children in a car. Unless I'm wrong

Thanks, I want to get a set of GNX wheels for it.


BONNEVILLE UPDATE!
I made a little progress over the past year. 2016 was pretty busy. We bought a house an hour north of where our old place was so I spent all summer moving, and finishing remodeling projects on the old place. We also had a baby the day after Xmas and finally sold the old house some time in March.
Anyhoo I bought a 6.0L truck motor in the fall for the Bonneville. It was advertised as an LQ9 but I brought a bore scope with and found that it had dished pistons which would make it an LQ4 325hp vs 345. But as I want to do a turbo settup some day I should be better off with the lower compression settup. I acquired a hood ornament, tail light, and side markers from Cackparts.
I also -scored a set of power vents off Ebay
-replaced the rear end with a built 7.5" with a 3.73, and a Richmond posi <good enough for now
-replaced the oem trailing arms with a Hotchkis set. one of the originals was bent
Last edited by Godlike on Thu Sep 21, 2017 5:18 pm, edited 3 times in total.

SUPRA UPDATE!
I drained all of the oil and coolant out of the oil plug and pulled the engine and trans. That was the last project on my old lift.

I miss my lift 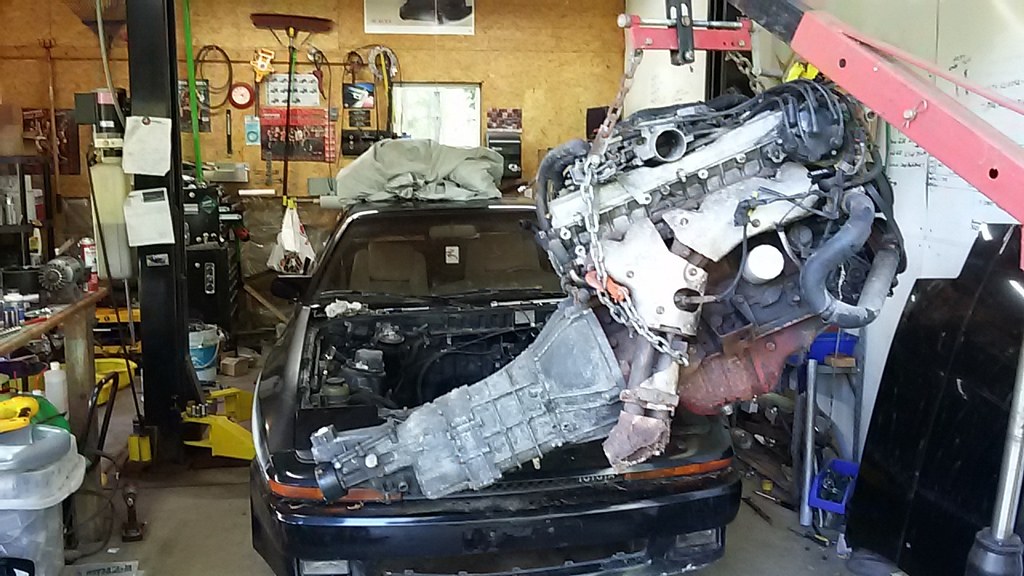 20160911_122217_zpsfqjcnlhm by GodlikeMotorsports, on Flickr
I sold the engine for parts for $100 and the trans for $400. If i was smart I would have parted the whole car out but here we are.
The independent rear suspension is bolted to a subframe that people swap in to all kinds of crap so they are desirable. Last month I bought a 110k mile Ls1 for $1300 which is more than i wanted to spend. From what ive seen though it is about $500 less than what most people ask for on Clist in this area. These motors seem to be drying up. It came out of a 98 Z28 so its about the least awesome Ls1 you can get. It came with everything but the ps pump and ac compressor.
I wont be doing much with either project this year as I want to finish the Impala and get it sold asap. Hopefully I can just continue to accumulate parts for a while.
Last edited by Godlike on Thu Sep 21, 2017 5:17 pm, edited 1 time in total.

Your selling the yellow Impala?

yep, ive wanted it gone for a while. I just need to find some ambition to dive back into that project. I remember driving it down to your place with a trailer and my compressor to part out your white GTZ. I never intended to keep that car though. If it was a 69 Cutlass I would have trouble parting with it.

Plan on making another bfest anytime soon, even though sounds like u have been pretty busy.... seem your aqua car up for sale for parts or whole iirc

"Soon" is a strong word but yes, I do want to get back to Bfest eventually. I would love to see Bfest crash the Hotrod Power Tour but its certainly not cheap getting a new hotel room every night. Ya I sold the Z26 about a year ago. It had a lot of cancer. It was time
Last edited by Godlike on Fri Aug 11, 2017 11:48 pm, edited 1 time in total.

Godlike wrote:"Soon" is a strong word but yes, I do want to get back to Bfest eventually. I would love to see Bfest crash the Hotrod Power Tour but its certainly not cheap getting a new hotel room every night. Ya I sold the Z26 about a year ago. It had a lot of cancer. I was time

I feel like latching onto a larger enthusiast group would help give this group some recognition. I am not in a position to plan a Bfest proposal right now, but if a Bfest proposal that partially revolved around a much larger national car meet was selected, that might help jump start this group with many more members and help keep it from dying out over time. It might help spark interest in the Beretta and the annual Bfest event.

I switched years ago - the picture sharing isn't as slick as PhotoF*ckit - but its not hard to figure out.

Also it doesn't crop or downgrade your picture quality.

You sell the Impala?

Huh, I guess I didn't know Flickr was free. Some one told me it wasn't years ago and I never looked into it. Cool.
Yes I still have the damned Impala. I did start working on it again though. I banned myself from working on the Supra until the Impala is done. I really don't have much left to do on it. I should really throw some shocks and springs at it though. Its a low rider now just from sheer neglect. I just cranked the control arm cams in all the way to pull the camber straight. When I go around a corner now it continues to lean in that direction after the road straightens out. How is that even possible? Stupid car. And screw Photobucket!

Flickr is a Yahoo product - has been for awhile.

So if you have a Yahoo Email account - you should already have one.

Mine are all tied together.

Users browsing this forum: No registered users and 5 guests